GET STARTED ON YOUR PROJECT TODAY. 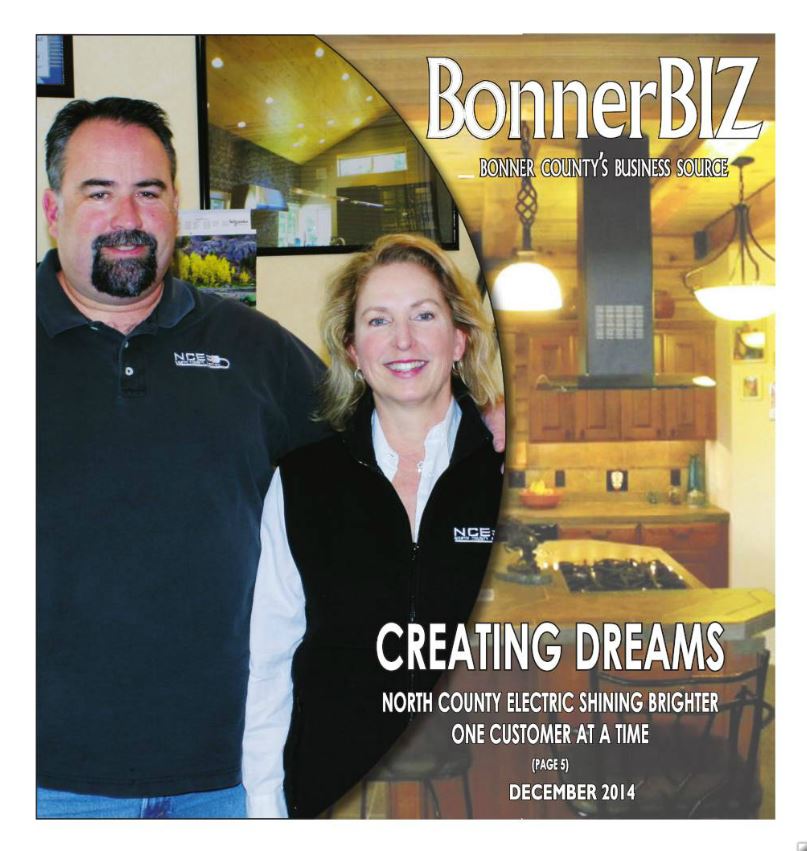 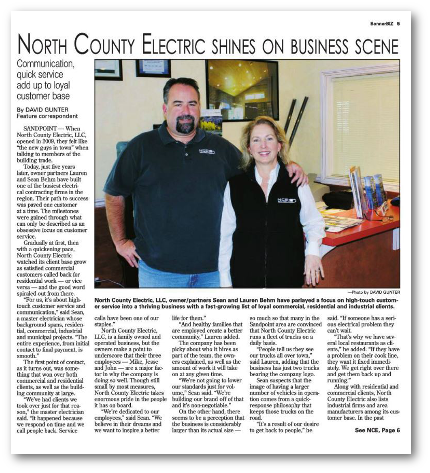 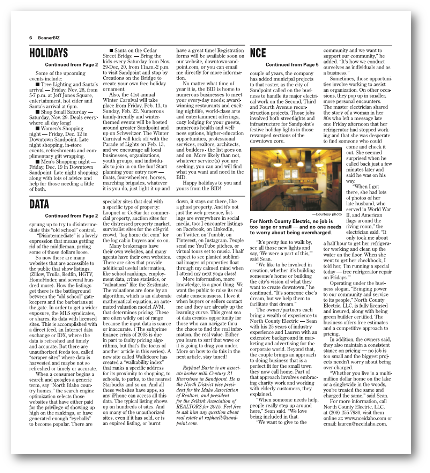 Sandpoint— When North County Electric, LLC, opened in 2009, they felt like “the new guys in town” when talking to members of the building trade.

Today, just five years later, owner partners Lauren and Sean Behm have built on of the busiest electrical contracting firms in the region. The path to success was paved one customer at a time. The milestones were gained through what can only be described as an obsessive focus on customer service.

Gradually at first, and then with a quickening pace, North County Electric watched its client base grow as satisfied commercial customers called back for residential work—or vice versa—and the good word spiraled out from there.

“For us, it is about high-touch customer service and communication,” said Sean, a master electrician whose background spans, residential, commercial, industrial, and municipal projects. “The entire experience, from initial contact to final payment, is smooth.”

The first point of contact, as it turns out, was something that won over both commercial and residential clients, as well as the building community at large.

“We have clients we took over just for that reason,” the master electrician said. “It happened because we responded on time and we call people back. Service calls have been one of our staples.”

North County Electric, LLC, is a family-owned and operated business, but the owners make a point to underscore that their three employees— Mike, Jesse, and John—are a major factor in why the company is doing so well. Though still small by most measures, North County Electric takes enormous pride in the people it has on board.

“We are dedicated to our employees,” said Sean. “We believe in their dreams, and we want to inspire a better life for them.”

“And healthy families that are employed create a better community,” Lauren added.

The company has been picky about who it hires as part of the team, the owners explained, as well as the amount of work it will take on at any given time.

“We’re not going to lower our standards just for volume,” Sean said. “We’re building our brand off of that, and it’s non-negotiable.”

On the other hand, there seems to be the perception that the business is considerably larger than its actual size—so much so that many in the Sandpoint area are convinced that North County Electric runs a fleet of trucks on a daily basis.

“People tell us that they see our trucks all over town,” said Lauren, adding that the business has just two trucks bearing the company logo.

Sean suspects that the image of having a larger number of vehicles in operation comes from a quick-response philosophy that keeps those trucks on the road.

“It is a result of our desire to get back to people,” he said. “If someone has a serious electrical problem they can’t wait.”

“That’s why we have several local restaurants as clients,” he added. “If they have a problem on their cook line, they want it fixed immediately. We get right over there and get them back up and running.”

Along with residential and commercial clients, North County Electric also lists industrial firms and area manufacturers amongst its customer base. In the past couple of years, the company has added municipal projects to that roster, as the city of Sandpoint called on the business to handle its major electrical work on Second, Third, and Fourth Avenue reconstruction projects. Those jobs involved both streetlights and infrastructure for Sandpoint’s festive holiday lights in those revamped sections of the downtown core.

“It’s pretty fun to walk by, see those new lights and say, “We were part of this,”” said Sean.

“We like to be involved in the creation, whether it’s building someone’s home or building the cities vision of what they want to see downtown,” he continued. “It’s someone else’s dream, but we help them to facilitate that dream.”

The owner/partners each bring a wealth of experience to North County Electric—Sean with 25 years of industrial experience and Lauren with an extensive background in marketing and advertising for the corporate world. Beyond that, the couple brings an approach to doing business that is a perfect fit for the small town they now call home. Part of that approach involves embracing charity work and working with elderly customers, they explained.

“When someone needs help, people really step up around here,” Sean said. “We love being included in that.”

“We want to give to the community, and we want to support our community,” he added. “It’s how we conduct ourselves as individuals and as a business.

Sometimes, those opportunities involve working to assist an organization. In other occasions, they pop up in smaller, more personal encounters. The master electrician shared the story of a woman in her 80s who left a message late one Friday afternoon that her refrigerator had stopped working and that she was desperate to find someone who could come and check it out. She seemed surprised when he called back just a few minutes later and said he was on his way.

“When I got there, she had lots of photos of her late husband, who served in World War II, and American flags around the living room,” the electrician said. “It only took me about a half an hour to get her refrigerator working and clean up the water on the floor. When she went to get her checkbook, I told her, “I’m running a special today—free refrigerator repair on Fridays.”

Operating under the business slogan, “Bringing power to our community, and service to its people,” North County Electric, LLC, is fully licensed and insured, along with being green builder certified. The business offers free estimates and a competitive approach to pricing.

In addition, the owners said, they also maintain a consistent stance on pricing—no job is too small, and the biggest projects needn’t worry about being over-charged.

“Whether you live in a multi-million dollar home on the lake or a single-wide in the woods, you’re treated the same and charged the same,” said Sean.